What is F Gas?

F gas is an abbreviation for fluorinated gas. F gases are a group of man-made gases which have a variety of industrial applications, such as use in refrigeration, air conditioning and fire safety systems. In this month’s article, we’ll be looking at the variety of uses for F gases as well as why they should be handled with caution.

There are several different types of F gases which differ in their chemical composition; the main types are hydrofluorocarbons (HFCs) and perfluorocarbons (PFCs). HFCs are the most prominent F gas and are used widely in commercial and industrial refrigeration, air-conditioning systems, heat pump apparatus and aerosols. PFCs are mainly used in electronics and pharmaceutical industries. They can also be used in refrigeration when mixed with other gases or, as in the past, in fire extinguishants.

Initially, widely used refrigerants (e.g. chlorofluorocarbons) were prevalent due to their useful features of being non-corrosive, non-reactive and non-toxic. However, they have the ability to deplete ozone in the atmosphere, which became a huge environmental worry. This lead to a shift to F gases, such as HFCs, being widely used as refrigerants instead, since these aren’t harmful to the ozone layer. 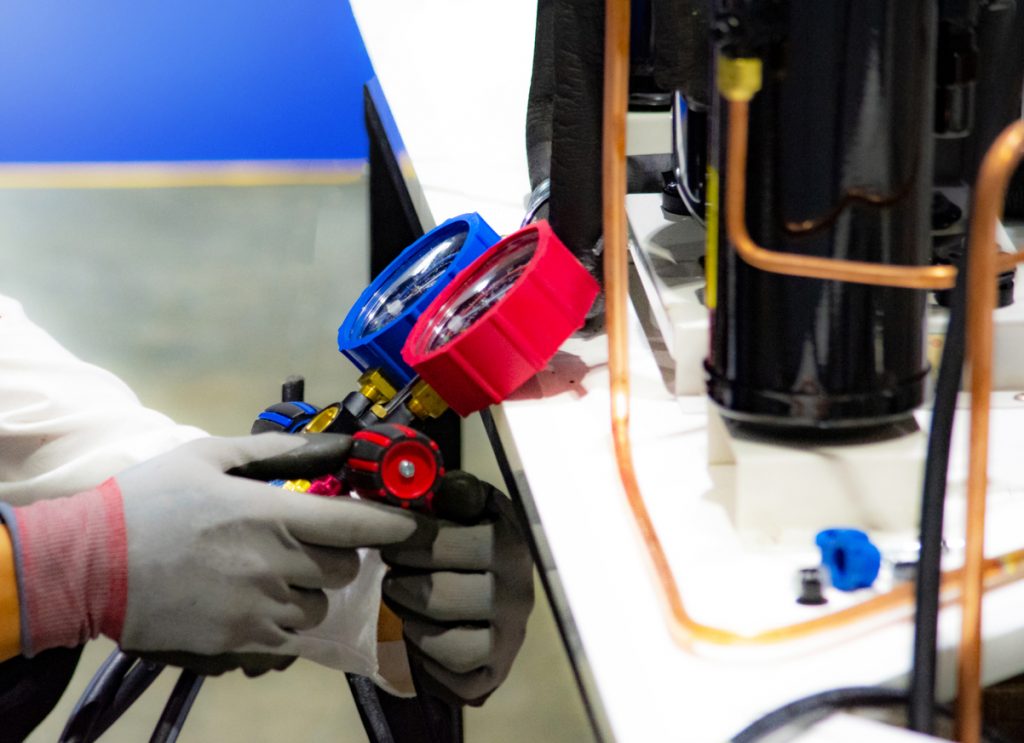 How does using F gas in refrigeration work?

Besides the useful features for refrigerants discussed above, F gases are ideal for use in refrigeration because of their properties relating to the pressure and temperatures needed for transitioning between gas and liquid. These properties are integral to the process which cools air for both refrigeration and in air conditioning.

In basic terms, F gases undergo a cycle involving compression, condensing and evaporation. This results in cooling which is utilised in both refrigeration and air conditioning systems. Firstly, compression increases the pressure of the gas which results in a high temperature too. This gas moves on to being condensed, this occurs by cooling the gas to a liquid whilst retaining the pressure. During evaporation, the pressure is greatly reduced which causes the liquid to evaporate, absorbing heat from the surroundings to do so – this is how the cooling of air occurs. The cycle repeats to maintain the cooling function.

In spite of their harmless relationship with the ozone layer, there are a number of issues with widely using F gases, such as HFCs. The largest cause for concern is that F gases are very strong greenhouse gases, with a global warming effect up to 23,000 times that of carbon dioxide! This has lead to increasingly strict regulations being imposed on the use and handling of F gases to try and reduce their harmful emissions. The negative effects of F gases on climate change can’t be understated as some, including PFCs, can stay in the atmosphere for thousands of years once released.

It is because of the drastic disadvantages of F gases that those who install, maintain or service equipment, such as refrigeration or air conditioning units, legally must have certification to do so. It is of utmost importance that if you do need work carried out on any equipment containing F gas – for example installation, leak tests, repairs, maintenance or disposal – trained and qualified technicians, such as those at Airedale Cooling, carry out the work.

If you need any assistance related to your air conditioning, contact Airedale Cooling. As an experienced and highly qualified authority on air conditioning, who have full F gas certification, we can offer a range of services from installing a new unit to the safe removal of outdated systems. Please don’t hesitate to contact us today with any enquiries.